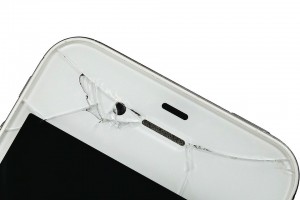 When it comes to damaging a smartphone, the possibilities are virtually endless. We’ve all heard the stories of broken iPhones. They run the gamut from funny to embarrassing, but one thing that they all have in common is that they are costly. The current cost of an iPhone is anywhere from $450 – $650, depending on the model you choose. When you factor in the information that you’ll lose if your iPhone is demolished, there is really no way to put a price on that…this is not a device that you want to break or lose often. In hindsight, however, the stories can be quite entertaining. Here are a few fun tales that we found around the web:

CNN’s iReporter, Terry Balmer, was relaxing on his rooftop with friends when he placed his phone on what he believed to be a safe, secure spot. Unfortunately, he failed to account for the potential dangers of receiving a text message while his phone was set to vibrate. When that fateful message came through, the phone leapt from the roof, and Mr. Balmer followed immediately behind.

“Hearing the phone hit the cement below was one of the most gut-wrenching sounds I had ever heard, and I don’t think anyone has ever climbed down from a rooftop as fast as I did that night,” Balmer told CNN.  Using a very complicated process for text messaging and taking photos, he continued to use the phone long after the damage was done, explaining that the phone had survived so long that he had become attached to it.

Surprising as it may be, one common cause of broken iPhones is the impact of being thrown against something. In one Buzzfeed article, this seems to be a recurring theme. In one instance, a clutch purse is thrown against a wall and its owner hears her screen shatter inside her bag. Another story involves a dropped call during a food delivery order. Apparently, that phone’s owner was quite hungry.

We also hear about the damage that can be done to an iPhone when it is simply dropped. Whether it hits the pavement, some gravel, or something else, you’d be surprised by the consequences of letting your iPhone slip from your hand!

It is altogether fascinating how often iPhones get run over by moving vehicles. In some cases, the phone miraculously survives, such as this phone that continued functioning after being smashed by an 18-wheeler. Other users are not so fortunate, however. In most of these accidents, the iPhone quickly becomes a distant memory.

As a word of caution, avoid leaving your phone on the hood of your car (like this person did). Try to leave your device on the porch or in the garage when you’re mowing the lawn, and keep your arms, legs, and selfie sticks inside of the vehicle at all times.

There are simply too many “iPhone danger zones” to name, and some types of damage are irreparable. Fortunately, a little bit of common sense goes a long way where iPhone safety is concerned. Learn from the mistakes of others and be mindful about how and where you use this priceless device. Most importantly, invest in a protective case you can trust.

Check out our unique, colorful, durable iPhone cases, all of which can be conveniently purchased right here in our online store!